PhD in theatre studies and additional degrees in theatre, film and media
studies as well as journalism and communication science from the University
of Vienna. Research on contemporary Dutch theatre, lecturer at the University of Vienna – Institute of theatre studies, public relations work for independent theatre groups in Vienna, eight years of freelance work with the Filmarchiv Austria in Vienna and editor of the journal Filmkunst. Many years of research on the British painter and filmmaker Derek Jarman, publication of Derek Jarman – Moving Pictures of a Painter. At the same time, intensive involvement with graphic design, numerous design works in the years that followed. Early 2000, founds a business,  freelance work in the areas of graphic design, project development and urban photography. 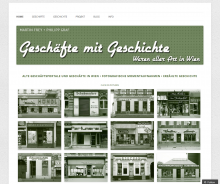 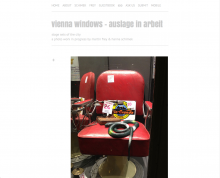 Vienna Südbahnhof
A documentary photographic work and virtual reminder of Vienna’s Südbahnhof, the rail station demolished in 2010 in order to make way for the construction of the new Hauptbahnhof. In collaboration with Philipp Graf, 2008 – 2010.
Vienna Südbahnhof 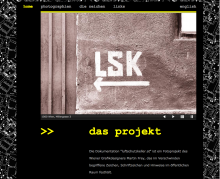 Air-raid cellars
A photographic hunt for traces of the markings related to these air-raid shelters, which were placed on the facades of Viennese buildings during the Second World War.
(1992 – present).
Air-raid cellars

Döner macht schöner (with kebab you’ll need no make up)
In 2009, this long-term project was begun; it explores changes in the appearance of Viennese (shopping) streets deriving from the opening of new businesses and establishments by immigrants from Turkey and Eastern Europe.
Döner macht schöner

Die Billigesser – The cheap-eaters
This project was inspired by the novella of the same name by Thomas Bernhard. A hidden camera (a Nokia 6230i mobile phone) was used to create short photo stories about public canteens in Vienna and Berlin, some of which no longer exist. The series was originally published as a photoblog on myspace, in collaboration with Helmut Mörwald, 2006 -2008.

Was Fotografie kann (What photography can do)
Concept and curating: Hermann H. Capor

This group exhibition shows results from different theoretical, technical and intellectual claims to the medium of photography. I am participating together with Philipp Graf with our project SPURENSUCHE 2018, invited by Hermann H. Capor. 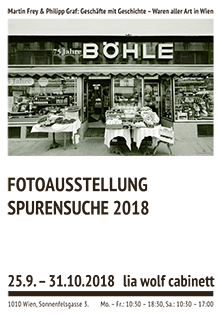 For the very first time, Philipp Graf and I have selected more than 30 shops from our collection „Geschäfte mit Geschichte – Waren aller Art in Wien“, which no longer exist. In the summer of 2018 we visited their places and in many cases we were able to record the changes photographically. The photographs of the old shops were juxtaposed with the new conditions – 22 of these pairs of images were shown during the exhibition in the bookstore of Lia Wolf.

BUDAPEST WINDOWS
It’s all about shop windows – but also more

Artistic concept and organisation of an exhibition series at three locations in Budapest, together with Hanna Schimek. During this exhibition we presented the results of our one-year artistic and urban-research project on shop windows of small shops in Budapest. The work was developed i.a. during workshops together with students at the Budapest School for Decoration and Window Dressing (class of Eszter Sárkics). Participating artists of the exhibitions: Miklós Erhardt, László Korga, János Sugár, Gruppo Tökmag (Tamás Budha and András Tábori) and Victoria Square Project (Rick Lowe, Maria Papadimitriou). 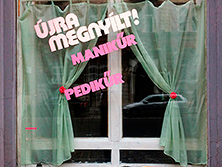 Dialogue Budapest – Vienna was the title of my one-year workshop with students of the School for Decoration and Window Dressing in Budapest. Digital slide show / large-scale projection, as part of the exhibition series Budapest Windows. 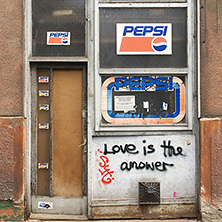 Love Is The Answer

Love Is The Answer is an urban research photo project about old Pepsi Cola logos and advertisments in Budapest. As part of the exhibition series Budapest Windows. 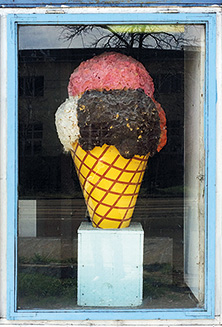 Das Eisstanitzel – A Fagyi is a photo installation with an ice cone sculpture by László Korga. As part of the exhibition series Budapest Windows 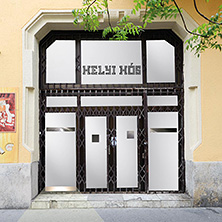 This is the final project of the one-year workshop Dialogue Budapest – Vienna at the School for Decoration and Window Dressing. Together with students from Eszter Sárkics’s class “Organizing Objects in Space”, I will transform a vacant shop in Budapest’s 8th district into a “Local Hero / Helyi Hős” 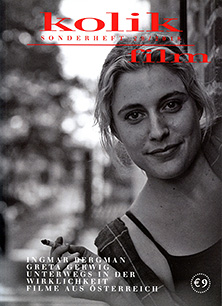 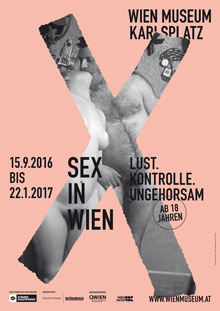 In cooperation with the magazine Stadtform nine photographs from my series Ring My Bell – Doors into the gay nightlife of Vienna in the 1980s are shown at the Wien Museum during the exhibition Sex in Wien – Lust. Kontrolle. Ungehorsam:
The totally eleven photographs from this series were shot in 1989 with an analogues Olympus OM 20 Kamera on Ilford HP5 Film. Now they were scanned on a high end scanner and digitally remasterd for the magazine print and the fine art prints.

Participation on the Walk of Art 2016

Eight photographs from the project Vienna Windows – Auslage in Arbeit, from Hanna Schimek and me, are shown on two big wall screens. 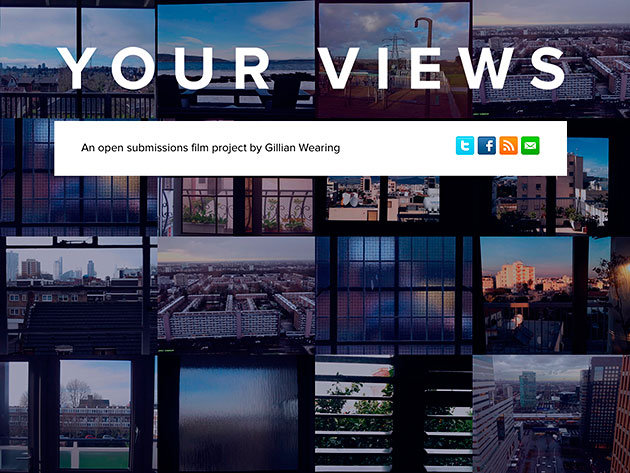 At the invitation of the British artist Gilllian Wearing I participate with a short film clip on her collaborative film project Your Views. The first run of this work will be at the HOUSE 2016 Festival, on the occassion of the 50th anniversary year of Brighton Festival in May 2016. Brighton University Galleries presents the work in the form of a video installation and exhibition. 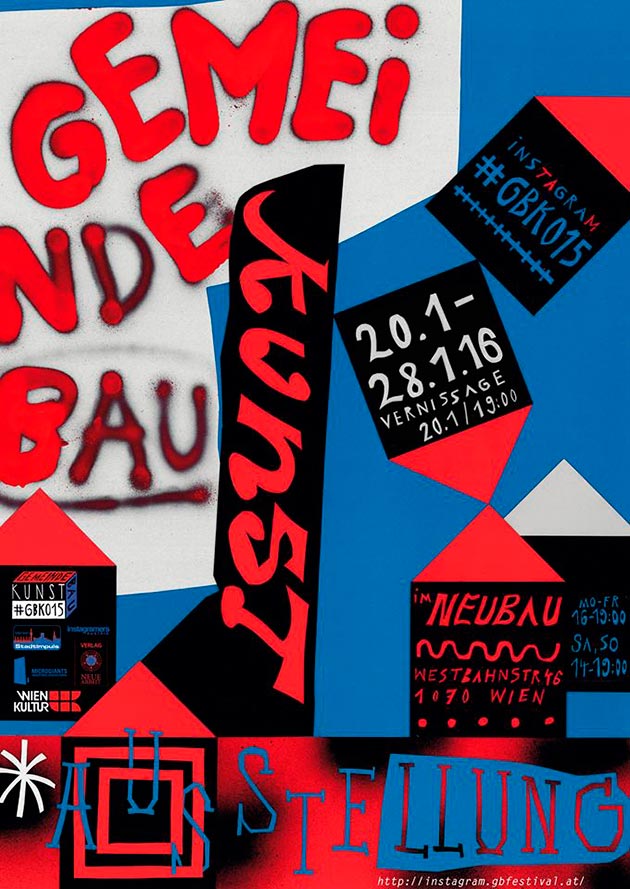 As part of a photo competition on the subject of municipal housing 14 winners were chosen from over 260 submissions selected, including three of my works to my theme Municipal housing – Green oases of the city. 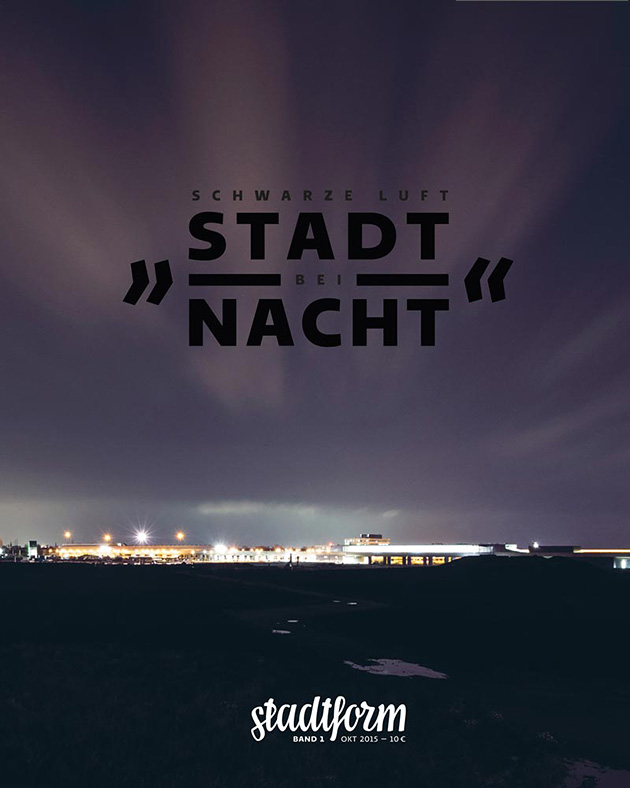 Vienna – City of Lights?
An interactive media project carried out for the magazine stadtform.
June – October 2015

Martin Frey and Philipp Graf dive into the nocturnal Bermuda Triangle, the most well-known nightlife district of Vienna, which is located between Rabensteig, Seitenstettengasse and Judengasse up to Ruprechtsplatz. Lighting and neon signs show them the way, they drift associatively through the dark streets of this area. They explore photographically what types of lights show them the way and how they perceive these. Lisa Puchner accompanies the two on their research journey through the night and records the surroundings of each station acoustically.

7. 4. 2015 – 19. 4. 2015
On the occasion of the Worldwide Pinhole Photography Day the exhibition EXPOSED – Exploring the Roots presents alternative and historic processes in artistic photography. As part of this exhibition I present my Polaroids Vienna Alsergrund which were selected from more than 500 entries. They were taken 2011 with original Polaroid© film from 2008 and are a commentary on my project Shops with history – sundry goods in Vienna.

Exhibition in the Wienbibliothek im Rathaus (Vienna City Library):
Vienna Windows – Display in Process
27. 10. 2014 – 31. 1. 2015
A selection of photographs will be shown as a projection, a spatial installation establishes associative references to the projected images. In a showcase of the reading room, the librarians of the Vienna City Library stage together with the two researchers a „display in process“. 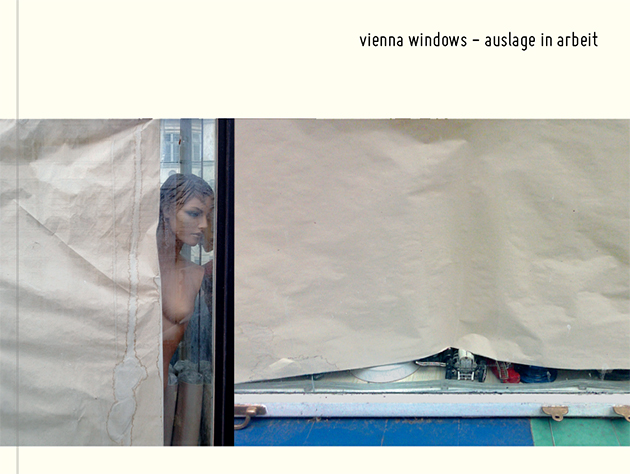 Artistbook „Vienna Windows – Auslage in Arbeit“
This book was published in the context of the exhibition „Vienna Windows – Display in Process“, which is presented from October 2014 to January 2015, in the Wienbibliothek im Rathaus (Vienny City Library):
92 pages, color, 80 photographs, 210 x 145 mm, EUR 15,- 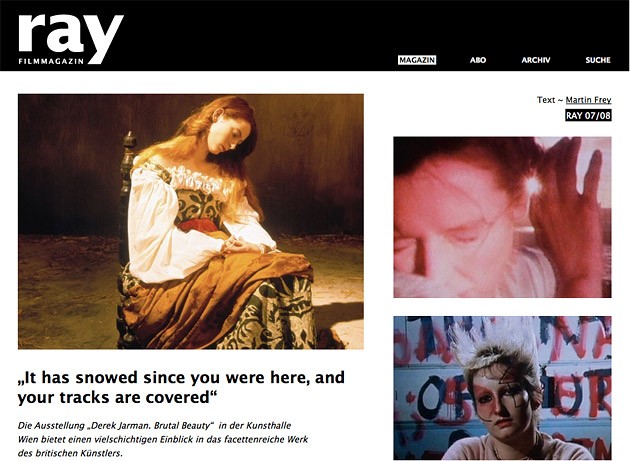 It has snowed since you were here, and your tracks are covered.
About the exhibition Derek Jarman. Brutal Beauty at Kunsthalle Wien, 2008
In: ray – filmmagazin, 07/08-2008.
http://www.ray-magazin.at/magazin/2008/0708/derek-jarman-eine-austellung 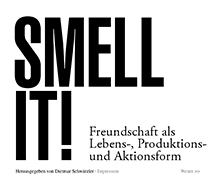 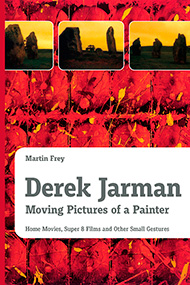 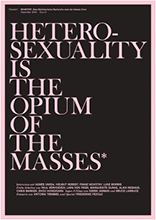 Study on the emergence of the Dutch off-theater in the second half of the twentieth century.
Creatieve Marge – Die Entwicklung des niederländischen Off-Theaters

All of the content of this website is protected under copyright. Any form of further use without the written permission of the creator is prohibited. Individual projects are additionally subject to different copyright regulations: please refer to the given project pages to find these. If you would like to make use of content, ask me about it – preferably by email.

The copyright of third parties has been regarded during the creation of this website, in particular, content created by third parties has been identified as such. If you should nonetheless notice a breach of copyright, I ask you to please bring this to my attention. In the case of such a breach, I will remove the corresponding content. 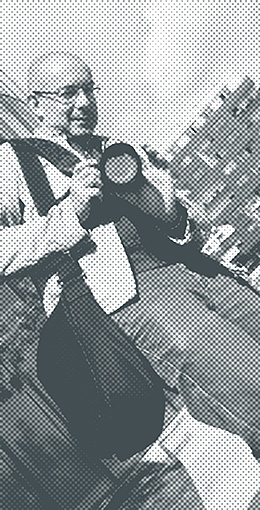